Over the next few days, I will be putting up brief posts about some of my favorite works read in 2014. Note that these books weren’t necessarily published over the past year, but I discovered and enjoyed them during 2014. 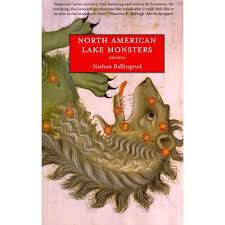 First up is Nathan Ballingrud’s powerful and disturbing short story collection North American Lake Monsters. This books fuses horror with more general literary fiction to pack an emotional wallop of the first order. It also features unique takes on both the vampire tale and the werewolf tale – no small feat.

Ballingrud’s stories generally feature down-on-their-luck protagonists struggling with emotional and family challenges as much as with supernatural forces. These are people battling to get by in the 21st century American economy and/or fighting the inner demons conjured by tragedy.

These conflicts are made all the more pointed by the intrusion of the fantastic. A housing contractor faces post-traumatic stress after a life-altering encounter with something fierce, feral and unexplained in “Wild Acre.” An ex-con’s strained efforts to reconnect with his wife and daughter are interrupted by the arrival of something on the shore of a nearby lake in the title story. A husband and father falls apart after the disappearance of his child, even as odd, otherworldly “angels” begin appearing around the planet in “The Monsters of Heaven.”

North American Lake Monsters is a brilliant fusion of supernatural horror and the sort of fiction one might see from Raymond Carver or Ernest Hemmingway. These stories are intensely felt and beautifully rendered. It comes as no surprise to me that this volume received the Shirley Jackson Award for best collection. Highly recommended.