The word “classic” may be horribly overused, but in some cases I simply can’t think of a better word. For example: 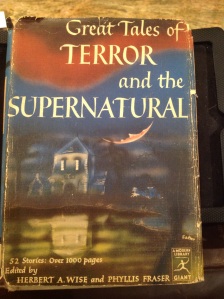 I remember finding this amazing anthology in the library back when I was in middle school (late 70s/early 80s). It revealed to me the depth and breadth of what could be considered a “horror story,” “a ghost story,” or a “tale of terror.” It even introduced me to H.P. Lovecraft, in the name of all that is unholy!

Back in those days, before the Internet and social media, I had no idea just how widely known and influential this book was. I thought I had stumbled upon some secret volume spirited away from the public consciousness decades prior. Titles like “The Great God Pan,” “What Was It?” and “The Beckoning Fair One” radiated mystery and forbidden knowledge, luring me into their world and under their spell. Simply put, this was the book that started a lifelong love for short stories of the weird, fantastic and horrific.

Years later, I found the edition pictured above, a bit battered and worn but intact and complete, at an antique store in Red Bank, N.J. I’m relatively certain it’s the best $8 I’ve ever spent.